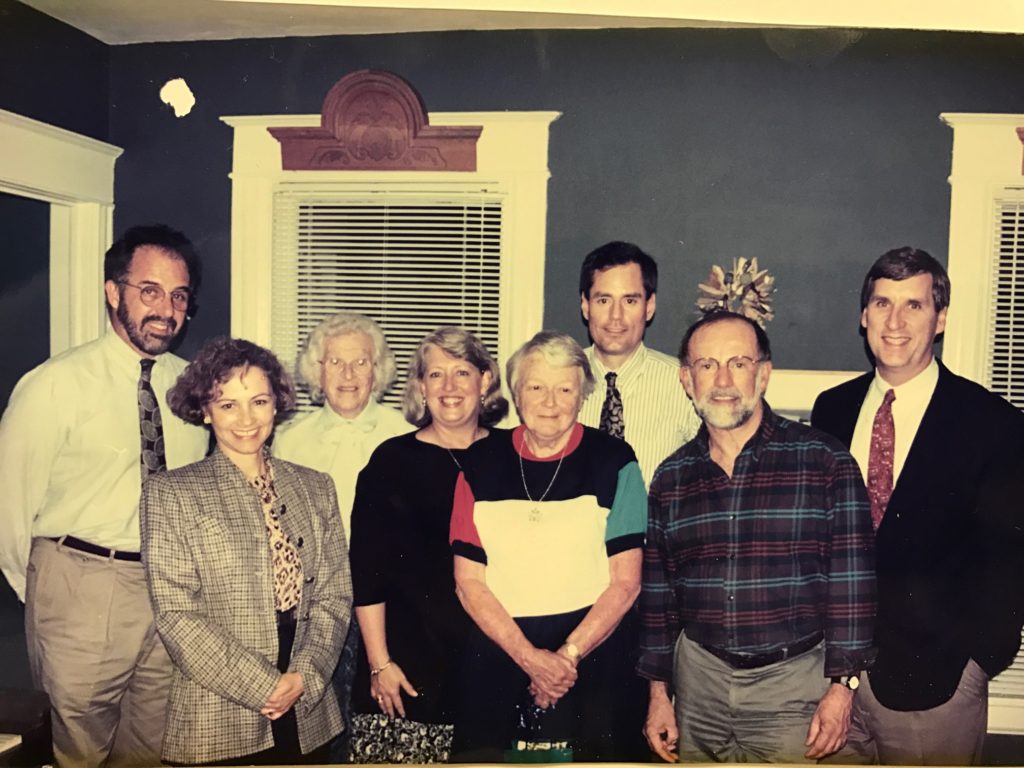 In 1977, Dick Moll, then Dean of Admission at Vassar College hired UMass Amherst grad student Doug Cooney to join the Admission Staff. It was an incredible career break that sent me on an upward trajectory ever since.  Dick was an innovator, a visionary, a pioneer, a marketing guru and someone who had a great understanding of human nature. Plus, he knew how best to package, market a college and match the right students to the college. Working with Dick was powerful stuff, challenging and inspirational. I shall always be in his debt for opening the door of opportunity and pushing me through it.  As Dick would often sign his many letters to college counselors and Headmasters, “Remember to proceed quietly, with resolve and a few snickers. Cheers. Dick Moll”.  Also, for admitted students, Dick would start the admission decision letter with two words “You’re In!”  That was vintage Dick Moll language. Also, please find below a beautiful letter written today by Bowdoin College President, Clayton Rose.

It is my sad duty to inform the Bowdoin community that Richard W. Moll, Bowdoin’s director of admissions from 1967 to 1975 and a creative and influential figure in the field of college admissions, died yesterday, May 24, 2017, in Georgetown, Maine. Dick died as he had lived-on his own terms-following two strokes in the days after undergoing heart bypass surgery.

Dick’s tenure in the Bowdoin admissions office was characterized by a willingness to challenge the status quo. He articulated a vision for Bowdoin, saying, “I think we can be better than a good regional college. We can be a significant national college. The change will have to start in the make-up of the student body.” He was the agent who translated into action the College’s commitment to increase the numbers of African American students on campus. He oversaw Bowdoin’s participation in a twelve-college exchange program that gave the Bowdoin community its first experiences with coeducation. Through the careful selection of transfer students and applicants to the Class of 1975 (the College’s first four-year coeducational class), Dick established a strong foundation for a coeducational Bowdoin.

Dick always emphasized the importance of the individual in the admissions process, and placed a high value on creativity, character, determination, and “personal pizzazz,” which he defined as “a certain indefinable human quality, combining equal parts of brain power, enthusiasm, persistence, dissent, and self-denial; unbottleable high spirits; the Latin spirit.Can Bowdoin really afford to be without it?” Dick made a persuasive case that standardized tests imperfectly assessed the qualities most valued in students by faculty. In 1970 Bowdoin became the first college to announce that applicants for admission would no longer be required to submit Scholastic Aptitude Test (SAT) and achievement test scores; they would be optional. It was a bold move that attracted national attention, and the number of applications rose sharply. Within a few years Bowdoin became one of the most selective colleges in the country.

Dick realized that there were powerful social, educational, and demographic forces at work in the late 1960s and into the 1970s that precluded finding a single admissions formula that could be applied from year to year. Each class was created with a slightly different theme in mind, but always with an eye toward bringing together a mix of personalities, interests and abilities, and experiences.

Hints of Dick’s own “pizzazz” may be glimpsed in the details of his life.

Richard W. Moll was born in Indianapolis, Indiana, on August 25, 1934. He attended Broad Ripple High School there, entered DePauw University in 1952, and transferred to Duke University, where he graduated in 1956. He earned a master of divinity at Yale University while working as assistant director of admissions and assistant to the master of Yale’s Calhoun College. In 1961 he became the executive director of the African Scholarship Program for American Universities (ASPAU) at Harvard, where he placed 1,300 students from thirty-three African countries at 232 American colleges or universities.

After his transformative role in admissions at Bowdoin, Dick took on the challenge of revitalizing Vassar’s program, where he expanded boundaries and horizons. While he was at Vassar, he was a central figure in developing the “Common App”-an application form widely in use today by colleges and universities. After five years at Vassar, he accepted the position of director of admissions at the University of California-Santa Cruz, which he held from 1980 to 1985. He returned to Vassar in the mid-1990s as interim director and then executive director of admissions.

His bold approach to admissions and his keen awareness of the historical currents and circumstances affecting higher education and the shifting needs of students and families made him a popular speaker, author, and consultant.

His essays and columns on the admissions process appeared frequently in The New York Times, Change, and other publications. His books included Playing the Selective College Admissions Game (1979), The Public Ivies: A Guide to America’s Best State Colleges and Universities (1985), Playing the Private College Admissions Game (1986), and The Lure of the Law (1990). He is widely credited with coining the term “public Ivies” to describe public universities that offered outstanding educational opportunities at comparatively affordable tuition costs. A gifted pianist with a showman’s touch, he performed his one-man musical, “Playing the Selective College Admissions Game,” on the road across the US, Latin America, and Southeast Asia.

Dick embraced life with an enthusiasm that was inspirational and contagious.

At the age of seventy he began competing in masters swimming competitions in Maine, and he competed in the 50m and 100m freestyle at the Gay Games (in his sixties in Amsterdam and Sydney, in his seventies in Cleveland in 2006, and as an eighty-year-old in Chicago in 2014). He displayed boundless energy as a member of the board of the Brunswick Village Improvement Association and as president of the Association of Bowdoin Friends. He was a great source of support and encouragement for members of the College community, and he leaves a remarkable legacy in the lives of those he touched.

Dick is survived by his husband, Wallace Pinfold. They were married on May 28, 2006, in Harpswell, in a ceremony that was reported on the pages of The New York Times. Memorial arrangements are pending and will be shared when they become available.

All of us at Bowdoin extend our condolences to Wallace during this difficult time, and we join him in celebrating the life and indomitable spirit of one who forever changed the landscape of college admissions and Bowdoin College.